Legionnaire, book 1 of the Galaxy’s Edge series, by Jason Anspach and Nick Cole is Generation Kill in space. In spite of the science fiction setting, the particulars are thinly veiled allegory for recent military misadventures, with all the usual suspects and situations. The danger didn’t quite reach the Hidden Fortress level of impossible-situation plot-twists, but it was an entertainingly constant chaos of complications.

For me there was cringingly uncomfortable racist overtones to the description and conception of the main alien species, with the double whammy of being both Innsmouth-look-ish (which for me added a whole other genre can-of-worms by reference) and clearly Middle Eastern inspiration, on the planet where the action takes place, but if you can get over that, or accept it as littérature vérité, the rest is a pretty strong and stirring story about the common (hu)man trying to survive a vertically-integrated perpetual-motion military-diplomatic clusterfuck.

The epilogue felt wildly out of place to me because that little story-within-a-story went completely wibbly-wobbly Flash Gordon science fantasy pastiche. I’m not sure how that bodes for the rest of the series. I hope that was just an anomaly. Otherwise this was a solid first installment in a series with promise for worthy visceral commentary on recent global political-military history through a very thinly-drawn distancing lens of uncomfortably-close-to-real fiction. 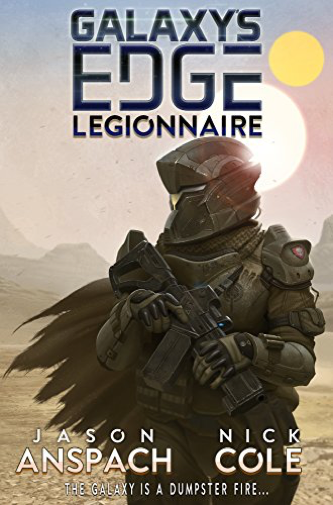 I made 7 highlights, but 3 of those were notes about errors.

Originally posted on my personal blog at Legionnaire