The Lost Words by Robert Macfarlane and Jackie Morris is a new release that is also a response to the loss of words about the natural world in the 2007 Oxford Junior dictionary. 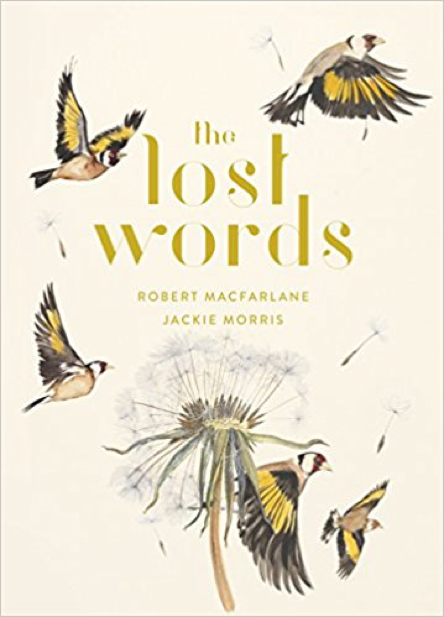 All over the country, there are words disappearing from children’s lives. These are the words of the natural world – Dandelion, Otter, Bramble and Acorn, all gone. The rich landscape of wild imagination and wild play is rapidly fading from our children’s minds.The Lost Words stands against the disappearance of wild childhood. It is a joyful celebration of nature words and the natural world they invoke. With acrostic spell-poems by award-winning writer Robert Macfarlane and hand-painted illustration by Jackie Morris, this enchanting book captures the irreplaceable magic of language and nature for all ages.

Via A new book teaches kids of the internet age all the “lost words” from nature and outdoor play—Thu-Huong Ha, Quartz

In 2007, Oxford released a new edition of its “Junior” dictionary, aimed at kids aged seven and older. A handful of parents and pedants were critical of which words had been dropped from and added to the edition. Words about nature—”moss,” “blackberry,” and “bluebell”—were gone, and in their place, “blog,” “chatroom,” and “database.” (“Saint,” “chapel,” and “psalm” had also been removed.) The dictionary made more cuts in 2012: “Cauliflower” and “clover” were supplanted by “broadband” and “cut and paste.”

In 2015, authors Margaret Atwood, Helen Macdonald, and Macfarlane, among other novelists and nature writers, expressed their dismay in an open letter to Oxford University Press. “Childhood is undergoing profound change; some of this is negative; and the rapid decline in children’s connections to nature is a major problem,” they wrote.