So, I’ve had to drop out of my D&D Curse of Strahd group because of a particular player, which has made me realize that I have to make a clear statement about groups I participate in. I’ve added an “Agreement” section to my LFG pages; but TLDR, I hope everyone in my groups can all not only agree to be on stream and recorded, but also to abide by Wheaton’s Law and Twitch Community Guidelines, at the table, whether on stream or not.

I realized that I was up front and clear about people needing to agree to streaming, but not the other stuff. It wasn’t the agreement to be streamed that was an issue. It was the don’t be a dick or a racist that this person failed to meet. I’m a little surprised at having to make a clear statement about that, but … I guess it’s not really a surprise.

This month I’m getting ready for a big move across country. So, I’m quite distracted by this looming event, and it’s my project all month long to get everything left to get ready ready. I’ll still be streaming, but not every day like I was in April. Then, in the beginning of June, I’ll be unable to stream until I get where I’m going and have fast Internet installed. I’m not entirely sure how long all that will take. I’ll hope it will be quick, but there’s no way to know yet. I’m looking forward to getting everything set up so I can start streaming again, with a new schedule, from a new timezone!

I’ve mentioned this before but I’m essentially doing a reverse Oregon trail for this one. It’s a long trip, and I’m moving to a region where I’ve never lived. It’s daunting, but I have hope it will work out for the best! I hope the cats and I make it safely there and can hardly wait to get settled in the other side.

I’ve put Cooking with Rigaroga! on hiatus until after the move, but I’m looking forward to figuring out how to continue that with actual groceries from a store, and my own recipes. But, for the rest of this month, I’m pretty much trying to clear out the fridge and freezer of all the stuff that isn’t shelf stable. Food for me this month will mostly be a bit boring!

We’re going to switch to weekly sessions of W40k Roleplay Deathwatch for a little while, as schedules currently permit us to do so. There was a session this past Sunday, and we’re doing on next as well. We’re in the thick of it now, and it turns out, somehow, we’re still in our first day on out current planet! So much has happened already, I was sure more game time had passed across our episodes so far.

I’m also working on a new series with Danny, who runs the W40k Roleplay Deathwatch campaign, on how to use Roll20, a digital tool that provides a virtual tabletop for playing pen-and-paper games online, everything from the very basics to advanced scripting. We’ll be doing the first couple episodes this month, and then plan to keep going after the move. We’re going to stream each episode, though they will be a bit shorter than a normal stream would be; and plan on the first episode on May 18th.

I’ve wanted to figure out Roll20 for a while, and I tried to use it for my solo RPG videos; but I found it a bit bizarre. If it starts to make sense, and I get a feel for it, maybe I’ll even start trying to run my own games. We’ll see!

In other news, I also recently added a shock mount to my Blue Yeti mics, which I hope will help a bit, but mostly with avoiding the cats constantly bumping into the mic. 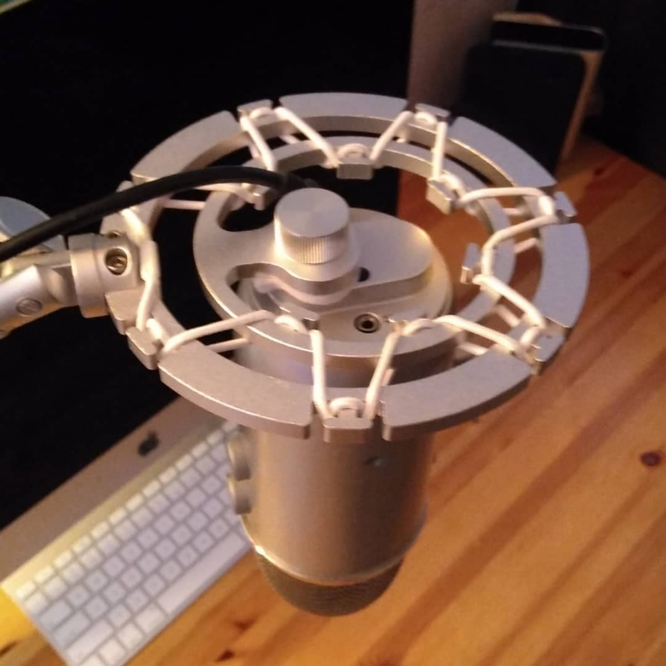