Here’s a conversation I had recently with streamer R0zu who is a Twitch Affiliate and member of the Nomads. You can also find R0zu on Twitter, and in his Discord. R0zu was selected by the Nomads as Streamer of the Month for May 2018. 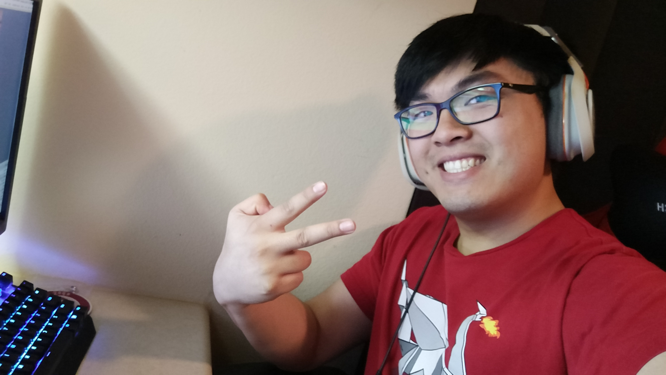 As a streamer, I’d say that I’m competitive at a casual level. I don’t like things to be on the line, but I like to be able to play to the best of my ability. I never really got that big into ranked because I always get nervous whenever I start it up. Once in a blue moon, I’ll hit up competitive game types, but you won’t be seeing that happen too often. Going back to the question, I’m a variety streamer with League of Legends, Playerunknown’s Battlegrounds, and Super Smash Bros. Melee. Melee being the only consistent games in my rotation. I was raised in Upstate New York, moved down to Arizona for college where I studied Game Design, and now I’m in Texas to stream!

Nah. I’ve been either working, sleeping, or streaming. The occasional activity with friends/family pops up every now and then.

Ha! Okay. But, do you have other interests besides streaming? Like, books, movies? Hobbies?

I’ve always been interested in Japanese culture. The food, the language, the animation, and everything in between. I was originally drawn to the Nomads from a friend of mine and the ninja on their logo made it that much better.

Longboarding used to be my main mode of transportation and it was really the only thing keeping me in shape throughout college. I love everything about longboards because there are so many ways to shape one up and ride it whether you’re wanting to cruise at a comfortable speed or go zooming down hills at 60 MPH.

I’ve recently been trying to get more into the Marvel movies and I’ve been successful, but I think it’s really difficult for some people (especially now) because they’re all so complex and incredibly confusing at times. Research is always your friend!

Oh! Some friends and I have been looking into the BYOC (Bring your own Computer) event at Quakecon 2018, so you might see me streaming for 4 days straight there! Tickets open up sometime soon and I’m hoping to get a spot.

That sounds like fun! I’ll look forward to seeing that on your channel, if it works out. 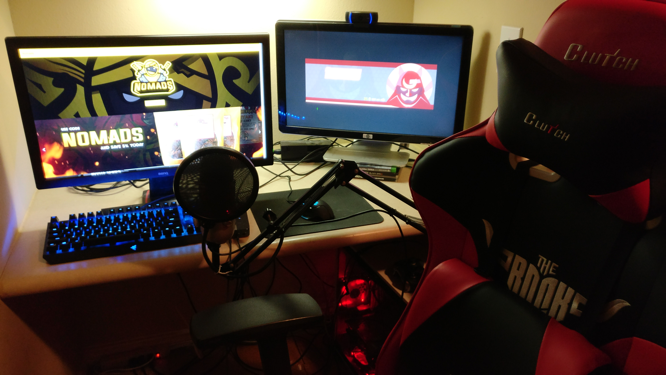 Excuse the incredibly poor wire management. So let’s start off with what’s in my desktop! I run an Asus Z170 Motherboard equipped with an i7-6700 Intel Processor, NVIDIA Geforce GTX 980 for my graphics card, 16GB of DDR4 RAM, and 5 Corsair Fans. I’m gonna tell you right now, I have a lot of different products from a lot of different brands. For my monitors, I rock a 24-inch BenQ as my main for gaming because of the 1ms delay and a spare HP monitor as my secondary monitor that I use to monitor (ha) OBS, Streamlabs Chatbot, and Streamlabels. I use a Razer Blackwidow Tournament Edition for my keyboard because I really like the feel and size of a Ten-keyless board. The only things I have matching are a Logitech Proteus for my mouse and a Logitech C920 Webcam. For my headset, I use Astro A40s with the Mixamp Pro. To top it all off, I use an Elgato Game Capture HD60 as a capture card for my Xbox One.

That’s quite a set up! Do you have things you want to add to the mix?

I eventually want to get a green screen, although it isn’t mandatory/completely necessary. I have a layout that works well and I think I might just stick to it. If we’re talking long term, I’d want to get a Canon hooked up to my PC so I can use that as a camera. The picture quality on those are absolutely beautiful!

A real camera and a green screen are good ideas for the future, for sure!

And, hey, there’s that Clutch chair you won in the Nomads raffle. How do you like it?

I did! It’s phenomenal. One of my last chairs actually broke on stream and after that, It’s only been uphill from there! Before I left college, I had a DXracer that was great, but I had to sell it because it would’ve cost more than the chair was worth at the time to ship it to where I was going to. I finally feel like I’m back in my comfort zone and I’m ready to get back into it!

Speak your mind, but learn to filter yourself. Obviously you don’t want to be complaining constantly, so try picking up on details of the game, ponder on them, try and guess why they did how they did.

Giving people silly names/voices is also something that I enjoy doing.

Don’t use the same joke time more than three times. After that, it gets old and boring.

Never get complacent. Always learn from your previous streams. Learn how to make things for your stream. Basic highlight videos are pretty fun once you get into them.

Authenticity and personality go a long way! Oh, but don’t forget that after the tenth time, a repeated joke gets funny again! Ha! Or, at least I hope so, or I’m in trouble.

Making memes that you can refer to in your stream is always nice. For example, I always like to bring up a character I’ve made up named FloppyPancakes that’s a parody of big hit Youtubers. Every time, it goes a little something like “Haaaay it’s ya boi, FloppyPancakes. Comin’ at you with another Minecraft tutorial video. Today, I’m gonna show you how to…”. You get it. Some of my friends join in on it because it’s funny to parody those types of overly hyped people.

I’ve been streaming actively ever since October of 2017. I actually can’t believe it’s been this long!

Hey, that’s cool! Do you have anything planned for your year anniversary?

I might do a 24 hour stream, but it depends on what my work schedule is looking like. I’ll try to work something around and make a day out of it for sure.

As I said before, games currently in my main rotation are League of Legends, Playerunknown’s Battlegrounds, and Super Smash Bros. Melee. Destiny 2 and Ni No Kuni II: Revenant Kingdom are two that I’ve started recently and I don’t see them dropping off anytime soon. I actually started Ni No Kuni II today and I’ve gotta say it’s pretty amazing!

I’ve also seen you play Closers a bunch. Do you plan a rotation, or do you just play what you’re feeling like at the time? Are there any games that you’re looking forward to playing?

Honestly, my stream has just been a mix of whatever I feel like playing at the time. I never really try to plan out a lot because I don’t know what my friend’s schedules are. It’s also important to note that I won’t know how I’m going to be feeling for the rest of the week, so if I plan something and decide on something else, it seems like poor planning. I’m more of a go-with-the-flow kind of person.

I actually have sticky notes reminding me of my goals every time I turn on my computer (as well as inspirational quotes that I really like) I’m aiming for the stars and I won’t stop at good enough.

In your goals, you really seem to be interested in positivity for viewer and the community. Is there a story about that you can share? Why’s that important to you? And, do you have a story about how you’ve been creating that for your stream?

I grew up playing video games. Through moving to different houses, getting different clothes, getting used to different school districts, video games have really been the only constant in my life. They let me escape the world when my heart broke for the first time (and many more times to come) and I’ve used them as a kind of therapy to deal with situations I wasn’t prepared to handle at the moment. Games have made me smile. Games have made me cry. No matter what day or age, games have always been there for me.

I met someone in high school. His name was Tommy. He was the most uplifting soul you had ever seen and was all-around a great person to be around. It’s been around a year and a half when his heart gave out due to complications. I keep him around in my memories from time to time and I’m trying to make an impact on everyone in my stream the way that he had an impact on me. He’s also the reason that I participate in the Extra-Life event every November. I want kids to have a chance to life because they can grow up to be great people that make incredible impacts on people, society, or even the world.

Creating a positive atmosphere that people can go to is probably the thing younger people need the most. I want to be the person I needed when I was younger. I’m trying to push towards that in my stream by not talking down on what I did or what my teammates did. Sometimes you just gotta take a deep breath and say “That’s alright. We got them next time.” If it doesn’t work out next time, it’s just a game and there’s no pressure in it. If I need to switch to another game because I’m getting tilted, that’s fine as well. It happens to the best of us and the most we can do is move on and not linger in the past.

I think sometimes all we need to do is just take a step back and take a breather.

Thanks to R0zu for talking with me, and be sure to check out his stream!