Here’s a conversation I had recently with brand new streamer Tbone, or Terrin Scott. Tbone is a member of the newly formed FoxFyre gaming and streaming community, and was selected for August 2018 as the first Featured Fox. You should check out Tbone’s twitter and instagram. 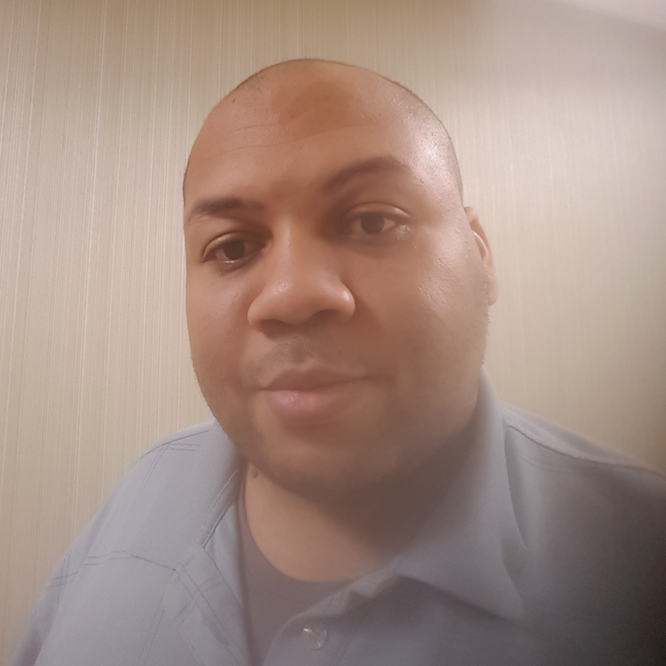 My name is Terrin Scott, aka Tbone. I am thirty one years young, and reside in New Orleans, LA. Gaming is a large part of my life ever since I first completed Super Mario Bros. on the NES when I was a wee one. To this day gaming has given me some very memorable moments in my life. I am very laid back as a streamer. I hope to not only entertain through game play, but also hope to get people talking about their day or some events that they will soon attend.

So, I understand you started streaming just this month after being selected as Featured Fox. How’d you decide to take that leap?

I have been streaming for a good part of August of this year. So far it has been a blast. I have been wanting to start streaming as a part of assisting a group of friends in another discord channel long before FoxFyre formed up. Sadly my rig at the time wasn’t up to par, and they kind of stopped streaming at the point I was able to get up and running! Now that I am where I need to be, I figure I’d still go full steam ahead with streaming.

For me, being a Fox is all about accepting all who want join with a shared interest in gaming. Casual or hardcore? Come in and enjoy some dope folks! Generally, I am a goofball in the group, or at least I like to think so.

How’d you find your way to the group? Were you a regular in one of the founders’ streams?

I found my way into the group by igetexcited. I was a regular in her stream, and an invite was handed out to me. I couldn’t resist the invite.

At the moment I am a part of a team that is raising money for the Pittsburgh Children’s Hospital. It is the Dreamless Dreamcast Marathon, and it is my first year doing it!

Hey that’s cool! Doing good with Extra Life and playing retro games! Can you tell me more about what that event is like?

It is awesome, until something breaks. Ha ha! It feels pretty good being in a room with people that share the same love of gaming for a great cause is just amazing.

Do you play on an actual Dreamcast console or emulation? What are your favorite Dreamcast games and any fun or funny memories about playing that console? How short is your VMU battery life, amirite?!

I tend to avoid the emulation route as much as possible. While the emulators get close, they tend to not be perfect in reproducing the game play properly. However for rarer games for the system, like Project Justice, emulation becomes a much more cost effective way to play those games.

I have a few favorites on the system. They are Jet Set Radio, Skies of Arcadia, Project Justice, and Power Stone 1 & 2. All of them held great memories with either exploring the world in Skies of Arcadia or standing triumphant over my brothers in Power Stone. Many sleepless nights were had with these games.

Ha ha, don’t get me started on the VMU life!

At this moment, I have been considering getting more into cosplay. I have been wanting dress up as some of my favorite characters

Oh, hey, that’s cool! I like to say that every home needs a costume closet for whimsy. What are your favorite characters, that you’re thinking about trying to do?

Well I have always wanted to cosplay as a White Mage from Final Fantasy, that is my main goal. After that it would have to be either Kazuma Kiryu from the Yakuza series and Vyse from Skies of Arcadia.

Cool beans! That sounds like a lot of fun. Hopefully you’ll post that to your social media for everyone to see too. What’s your setup like for streaming? 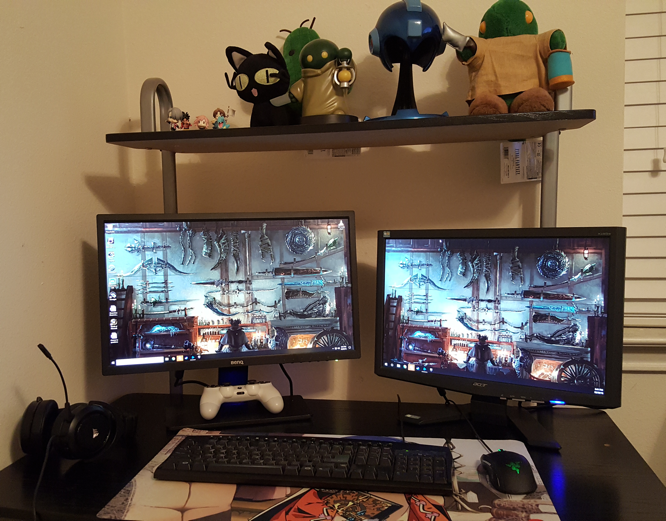 Good plan with a second monitor to help stay aware of chat! And I see you have a couple console systems you play. What else is in your gaming setup? 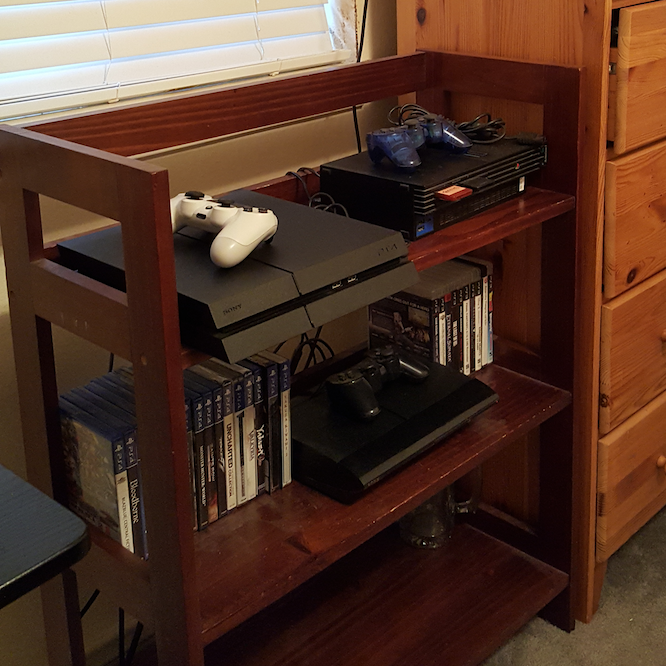 So far I have a Sony PlayStation 2-4, Nintendo 3DS, Nintendo GameCube, and, my favorite system, the Sega Dreamcast. I am looking to add to my collection in the future.

I see some space on those shelves for more systems! I know you just started this month, but I’m curious what do you know about streaming that you wish you’d known earlier? Or, best advice about streaming you’ve gotten?

I think the best advice I got is that you won’t know your ready until you get out and do it. I was afraid much of the time that I wasn’t ready because I thought everything needed to be perfect from start. This is a work in progress and you shouldn’t expect to be perfect from the start.

Oh, yeah. Look, streaming isn’t ever perfect. Murphy will mess something up, and streaming is like a Murphy’s Law magnet! Getting comfortable with not being perfect and having things go haywire is good advice. What software are you using to stream right now and how was that part of it for you?

Oh! Murphy’s law I will never escape you! Ha ha! I have been using the Streamlabs version of OBS. It has difficult to get the basics down, but it has been something that isn’t easily forgotten. The good thing with this I can always edit, and I really do like that a lot.

Right now I am streaming a lot more Sega games that I have been enjoying over the past few years. Typically they are action games, but I will venture out in to other genres like platformers and rpgs in the future. Look forward to that!

Sounds like you’re into a lot of retro and retro-inspired gaming. There’s a lot of indie stuff out there and other old systems to check out. Any specific old school games you’re hoping to revisit or upcoming games you’re looking forward to?

I would love to revisit Parasite Eve and Xenogears on stream. While waiting for the next big thing to come out from Sega, those two games held me over quite a bit. Many great nights were had with those games. I think I have the sound tracks somewhere on my computer somewhere.

As for games that I am looking for, Ghosts of Tsushima, Sekiro: Shadows Die Twice, and Fist of the North Star: Lost Paradise are on my radar for sure.

For my stream I would love to get to affiliate to start from there partner if things go well. I hope to have a pretty awesome community of people that can come in and enjoy not only the game being shown, but can come around and chat. High positivity, maximum chill.

Thanks to Tbone for talking with me, and be sure to check out his stream!