RafThree, or Raf, is a streamer I’ve known for a few months. I had the chance to have a conversation about streaming with him recently. RafThree is a Twitch Affiliate and member of the newly formed FoxFyre gaming and streaming community. He was selected for September 2018 as Featured Fox, a recognition of involvement in the community. You should also check out RafThree’s Discord, Twitter, and Instagram.

Well, I’m RafThree but you can call me Raf. I mainly stream Overwatch but I like to play other games especially games with a story to play through so I can enjoy or poke fun at them, a la Mystery Science Theater 3000. I’ve been told that I have “Dry Humor” and I only play games that I have fun playing. So currently I’m doing Destiny 2, Overwatch, and >observer_.

I’m planning a charity stream soon for the St. Baldrick’s Foundation. It’s a foundation to help raise awareness of Childhood Cancers as well as help those affected by Childhood Cancers. St. Baldrick’s raises money for their cause and also hold “head shaving” events to show solidarity to those children that lose their hair due to treatment. I came across the foundation because my niece was diagnosed with Ewing sarcoma when she was about 15 years old. She’s 21 now and cancer free. I’ve been doing my best to keep doing mini fundraising attempts each year in September. I’m having some scheduling issues this year, but I’ll be announcing this soon.

I’ll look forward to hearing when that happens, and will help get the word out. That sounds like a cool event, and for a great cause. Glad your niece is doing well. And, good on you. So you’ve done fundraisers before, but this will be the first one as a streamer? What do you have in mind for the event?

Since it’s my first time doing this as a stream I don’t want to get too ambitious as to doing anything too new. I’m hoping I’ll be able to set up the donation link correctly atm. I would like notifications to go off for each donation. It’ll be on the day that I do my long stream so I hope for more exposure to the foundation in doing so.

The streaming community has been really active in charity fundraising events, and done a lot of great work helping causes like the St. Baldrick’s Foundation. I hope you have much success for that event! 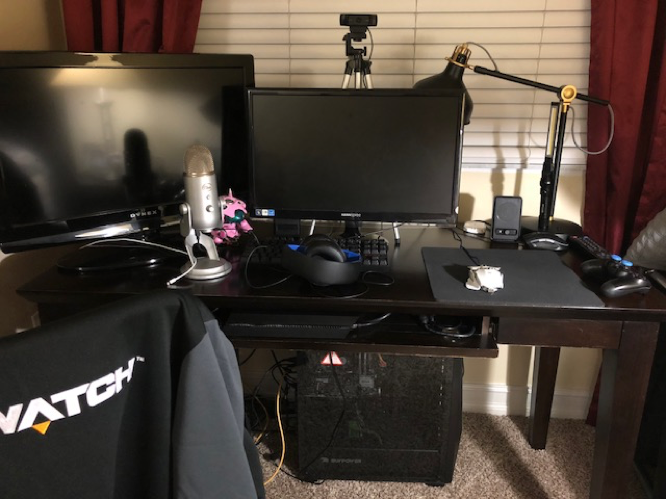 My setup is very resourceful, you could say lol. My main monitor is a Hannspree 720p 60hz that I bought about 7 years ago. The second monitor is actually a TV 720p I bought about 5 or 6 years ago that has HDMI so I use it as my left monitor to help with streaming and reading chat or working on OBS while playing. My cam is a Logitech c920 which is great for the price. The mic is a Blue Yeti Silver that was gifted by GameThesis which I’m very thankful for as well as for the chromakey green screen and Elgato HD 60.

My mechanical keyboard is a Red Dragon that I got for $30 bucks and is great. My mouse is a Combaterwing CW-80 that was gifted to me by my sister in law that she got for $20 and it’s awesome. The little wing on the mouse helps me from bumping the mouse pad since my hands shake so much.

This is my first PC that I do not build myself in over 10+ years. It’s an iBuyPower build that was a good price especially with how expensive GPUs can run now because of the crypto miners. The huge tower on the left is my old build that’s pretty much just there as a memory. LOL! In the pic I couldn’t show my green screen since it was packed up. As for lighting I use two night stand lamps that’s part of the room, I bounce that desk light lamp off the white blinds and use that LED lamp for face light. During the day I’d open the blinds and use the sun as my third light and not use the desk lamp. Yes I know that’s a big no no but hey gotta stream with what you got ;)

Heck yes, I agree! Do the best that you can with what you’ve got for as long as you are able. I think that’s especially true about streaming, which is something one can spend unlimited money on equipment. But, we’re real people, not television stations or movie production companies! Wait until you need a thing, instead of trying to buy everything up front before you really need it. Stream with the equipment you’ve got!

What I know now that I wish I knew about streaming that I wish I knew earlier… Nothing really. I feel I’m learning things at the right pace and researching and learning as I go so I’m in no rush but I’m not just sitting on my butt (streamer pun intended) just playing games. The best advice I’ve gotten about streaming is to just do it. Just start streaming. Don’t just say you want to do this, or that, just do it already. No stream will be perfect and mistakes, disconnects, bad sound, all of that will happen. As you said with Tbone’s interview, Murphy’s Law is still in effect. Don’t let the goal of perfection prevent you from streaming. Striving for perfection is a sign of insecurity and that will never be quenched until you finally just jump on stream and stream. Also keep in mind that “imperfection” might be what helps you stand out from all the other streamers and your viewers might see as your best trait that keeps them on. I learned more from my test streams and met so many of my current friends/followers from test streams. So to make a long story even longer, just stream.

I started streaming about near January 2018 and became affiliate about 5 months ago so I think it was in May 2018.

You mention that you only play games you enjoy, and that seems like a really good idea. Maybe that’s even something that one could call advice for people wanting to stream! Of course, a lot of streamers play what gets them viewers, or try to make that balance out. Personally, I struggle with that, but feel I stream only what I’m drawn to play, as well.

Are there games that you’ve enjoyed a lot that you’re not playing now? Maybe this is a question about old favorites!

I really loved playing Shadowrun for the SNES and the new Shadowrun Returns but it’s not so fun to play on stream. If I play an RPG I prefer it to have voice acting in it so it’s not just me reading all the time. I also really like Destiny but I haven’t played much of Destiny 2 at all so I’m trying to get back into it.

Cool! Since you mention it, I pitched in to the Shadowrun Returns crowdfunding, way back. Anything you’re looking forward to that’s coming up?

I’m really looking forward to Red Dead 2. It looks interesting since it’s a story game and deep. I’d love to play that through with everyone. I really liked playing the Black Ops 4 Blackout BR as well.

My goal for the future and to be my continued goal is to stream content that my viewers enjoy and I enjoy as well. So I want to entertain and have fun with my current peeps in the Raf Pack and to those new buddies that join. Partner or anything like that is a bonus it’s on my “that’ll be cool list” but I want to end each stream feeling “Damn that chat was popping” or “Wow that was so damn fun”. If I ever end a stream not feeling like that then I gotta change things up.

Seems to me streaming can get tough sometimes too, and it can be hard to keep one’s spirits up; having a hoppin’ chat really helps! But, every streamer, I think, should keep their health in mind and listen to themselves about that. So, more good advice about switching things up! Do you do anything else to keep yourself in good spirits, before or after stream?

Just starting up a stream gets me in good spirits and I’m always reluctant to end the stream since I have so much fun with it. I don’t run into any issues starting a stream or ending. What keeps me in that good mood is that I start each stream not expecting anyone to show up. For me each stream is set to be just me with electric skateboard and electric longboard lol. When I see that first person chat I’m already exceeding expectations and I’m boosted. I tend to be the one chatting in streams so when I see someone chatting with me on stream I get excited and want to chat too.

Streaming can be tough, but it can also be its own reward! Haha!

Thanks to RafThree for talking with me. I hope you’ll go check out his stream and watch for his announcement about his upcoming charity event for St. Baldrick’s Foundation, and help make that a success!