JDensey, or Jacob, is a relatively new streamer. I had the chance to have a conversation about streaming with him recently. JDensey is a member of the newly formed FoxFyre gaming and streaming community and was selected as Featured Fox for November 2018, a recognition of involvement in that community. You should also check out JDensey’s Discord, Twitter, and YouTube.

Take a moment to say howdy and introduce yourself! 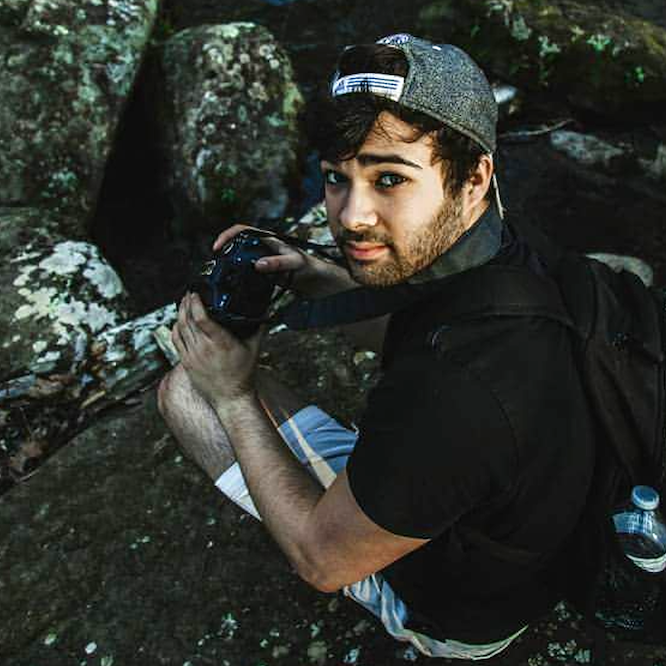 I’m Jacob aka JDensey, im a fairly new streamer. I’ve always loved gaming, but only recently gotten into PC gaming. I’m a Cuban American, and I’ve lived a lot of places growing up.

What was the reason for the mobility? Military? And, I wonder where have been your favorite places to live?

Yes, military family, and most definitely Alaska! It’s definitely my favorite place. I miss living there.

I’ve been once, and got to fly into a tiny fishing village and then ride a fishing boat coming down the inside passage to Seattle on the way back! Were you close in to civilization? Did you get out to the wilds much? Or, I mean, put another way, what’s the part you miss most?

I lived in the biggest city, but we went out into the wilds very often. I spent most of my childhood fishing for halibut and salmon, and being on the water out there is easily my best experiences. You see a lot of amazing things out there, scenery and wildlife, etc. One experience that stands out is when we came across blue whales and one surfaced about 5 yards off the starboard side. You never really realize how big they are until they are that close.

You mentioned only recently getting into PC gaming, were you a console gamer before this?

I have played different consoles from Nintendo to Playstation 1 to Xbox and most recently Playstation 4. My main console games were Overwatch and Rocket League.

I keep thinking about hooking up some old consoles again. I lost most of my Nintendo 64 carts over the years, but I still have a few. You should do a retro day of streaming!

I don’t think I have my Nintendo anymore unfortunately, but I have thought of streaming some older games like Knights of the Old Republic.

So, then, who are you as a streamer?

I’m a pretty new streamer, as I just got into PC gaming recently. I like to try to be as interactive with viewers as possible, while attempting to give them entertaining gameplay.

Hmm, maybe six months off and on? Maybe two months so far of more regular streams.

Oh, hey, that’s cool. Good luck on the adventure! Where are you on your Twitch Achievements?!

Not very far! Haha. Coming up close to Twitch Affiliate though!

Huzzah! And, being Featured Fox should help a bit with that too.

How’d you find the FoxFyre community, and what’s your involvement?

I found FoxFyre through Rafthree, a fellow Twitch streamer and FoxFyre community member, who was one of my main influences to start streaming. I try to stay very involved in the Discord and now through my stream as well, because the people of FoxFyre are very cool cats, and they throw a lot of support my way.

Hey, yeah, Raf and I got to talk before. And, it’s been great to watch the FoxFyre community start up and keep growing. Having that kind of group for mutual support seems great.

I’m a big racquetball player, although I don’t play as much as I used to. I’m also trying to get into graphic design as a hobby. Also I’m a huge trivia buff, and I have a knack for memorizing useless movie quotes and song lyrics.

Yeah, not sure how to work racquetball into streaming, unless you do VR or maybe a Wii! Have you thought about doing something like that?

Sure, sure. Okay, I hear you. But, I’ll just say: what’s a home without room-scale VR? A house. That’s what. Just a house. And, you need a moat. Just sayin’. Priorities!

Can’t disagree with you there! 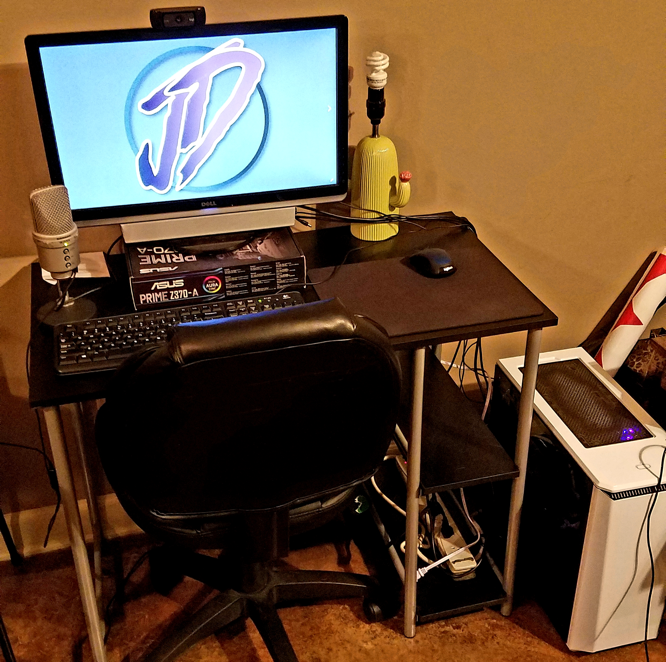 Very basic! Just got a new desk and a new mic (Thanks, Raf!) and hopefully I will be upgrading my single monitor setup to dual. I have plans to get a new mouse and keyboard soon.

Haha! Cool cactus lamp. I think a good quality mic can really step things up, so glad to hear you got that going. Going to go with a blinky keyboard and mouse? Extra buttons on your mouse can really help in some games too!

Haha! The lamp doesn’t quite work without a shade on it, just a bit too bright. I want to get a Redragon brown switch keyboard soon and I just bought a Logitech g502, it hasn’t come in yet, but that will have 11 buttons on it.

Investing time into improving your overlay is tough stuff, and finding the time to stream is always hard. I would say make sure that you are willing to dedicate the time and effort into it!

Putting time and effort can mean different things, but yeah! Having a regular schedule is something I’ve struggled with myself, and I think it’s a big one. I’ll probably never be a streamer that’s live for 6 hours every day, but I have a strong feeling that a regular schedule, when I’ve managed it, has been a very good step.

Most definitely. Working a full-time job and balancing time between work, streaming, and spending time with friends and loved ones is a challenge, to say the least. I try to stream regularly after work on weekdays, but things come up to prevent it sometimes.

I stream Overwatch, my favorite game, and Call of Duty 4 Blackout.

Anything coming up that you’re looking forward to?

Not really, although I may give Fortnite another chance.

I hear that’s popular with the kids!

I would like to build a community of friends that can come to my stream to interact and just have a place that people feel welcome.

Being involved in a streamer community, like FoxFyre, seems like a good way to work toward that, but what other ways are you thinking about creating that for your stream?

I have a few ideas, but nothing concrete. I just try to be myself and stay positive, and eventually I’ll introduce new things to the stream.

We’ll look forward to seeing how you develop your stream.

Thanks to JDensey for talking with me. I hope you’ll go check out his stream!