Here’s a summary of a continuing story, The Tales of Mukoda, a series of actual play in an ongoing persistent solo roleplaying campaign, with my character Mukoda ha’Varou, using Ironsworn and Ironsworn: Delve, and other parts of the system. You can see all of my actual play sessions in the Ironsworn playlist over on my YouTube channel, and consider following me over on Twitter or Instagram as well, or check out all the other things.

This campaign journal entry covers character creation, which is essentially the first part of session 0.

Welcome to the world of Ironsworn! But, who am I in this world?

Inspired by Adam Koebel’s Half-Elf character, I started to think about another First Born ancestry: Varou. I’ve decided to be Half-Varou.

I use the Oracle to workshop a name, and come up with Mukoda. I decide my full name includes my ancestry and is Mukoda ha’Varou.

Thinking about character stats, I struggled a bit, because all of the stats seem “wolf” like to me, but I settle on 2 Edge, 3 Heart, 2 Iron, 1 Shadow, 1 Wits. I’m thinking that this character isn’t inherently very sneaky or deceptive, nor particularly knowledgeable or observant. I felt that I’d like to be reasonably quick and agile, as well as reasonably physical and able to endure; I’m equally skilled in both ranged and close quarters combat, but not super great at either. What I have in most abundance is courage and willpower, and social skills to match; probably something I gained whilst trying to navigate the world as someone with mixed heritage. 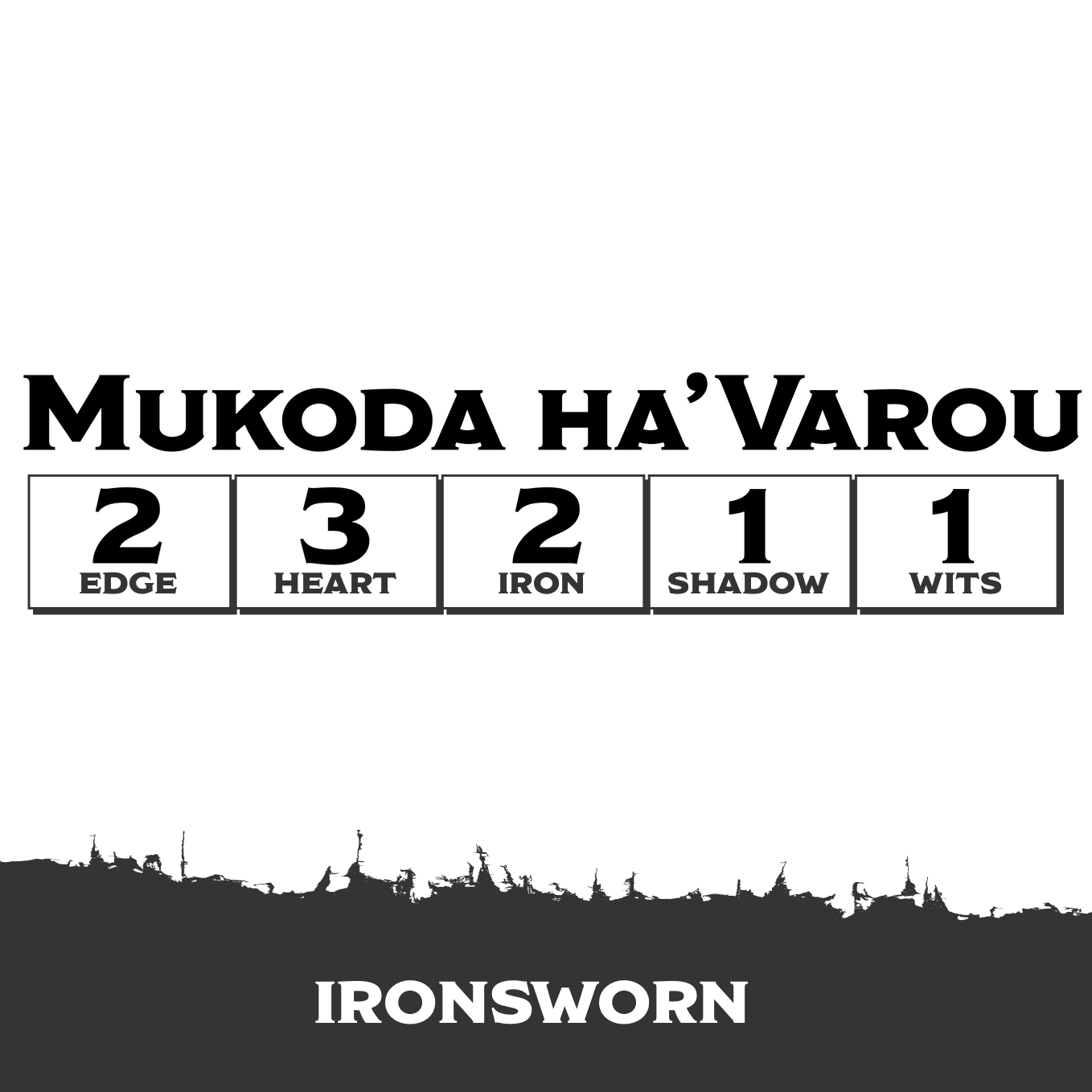 I set my starting Health, Spirit, Supply, and Momentum where they all are at when fresh, prepared, and ready to go.

For my initial long term goal, I decide that I want to have a character that has realized the barest beginning of mysticism and the powers that knowledge makes available. I think I’ll start out with at least one Ritual, but that I want to find out more. Finding out more is a process that I’m not sure about yet. I’ll figure that out later. But, the Path itself involves fulfilling an formidable, or harder, iron vow in service to an elder mystic just to become a Ritualist, and gain the Asset. 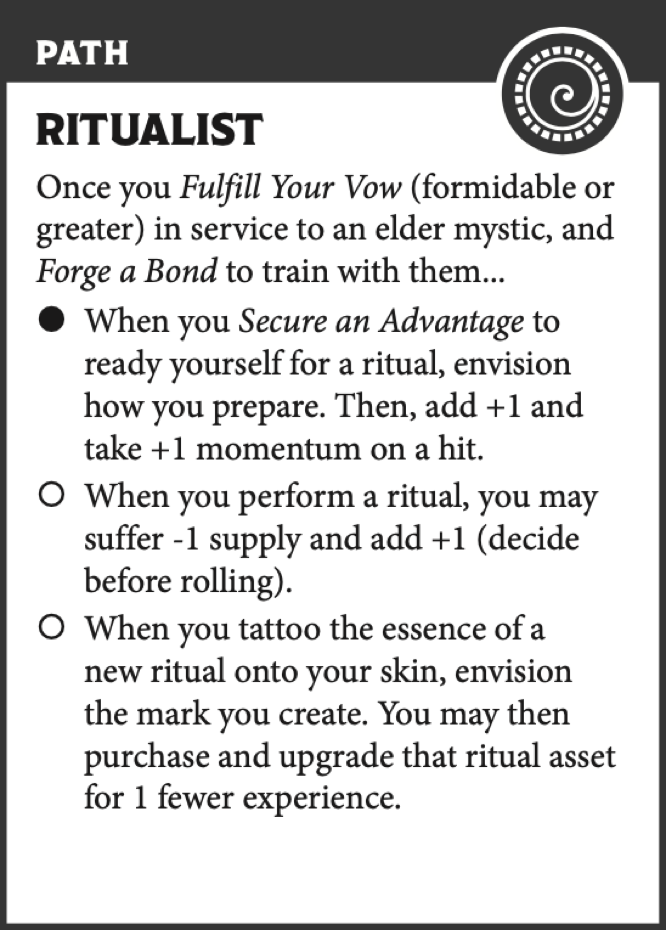 I decide this background vow’s overall difficulty is Extreme. I’ll figure out more about what this looks like later too.

I ask the Oracle for a settlement name, and the response is Stonetower. This will be an Ironlander settlement where I think I will begin my tales, though I know nothing else about the world or where this settlement is in the world, yet.

My first two bonds are with people I’ve met so far. The first is with a bandit, who wants to advance their status. They are sociable, bold, and stoic. This bandit I know is an Ironlander named Katja. The second bond is with a trader, who wants to defend a place. They are attractive, armed, and insensitive. This trader I know is also an Ironlander named Ikram. I’ve met Katja and Ikram as I’ve travelled on the road, and have at time been on either side of the perennial, universal conflict between bandits and traders. I’m not sure yet how they feel about each other, but it could go either way!

I decide that my third bond will be with the Stonetower community. Since this is an Ironlander community, I will be an inside-outsider. I have mixed ancestry, but I’m probably mostly familiar with Ironlander culture as that is who I’ve been around most growing up. There will likely be a lot of tension around my mixed heritage throughout my ongoing campaign, as something to play around with as continue.

I’ve been living in community with Stonetower, trying to experience what it is like to be more settled and have roots in a particular location. My mixed heritage has been increasingly troublesome as there’s been an ongoing conflict with a nearby Varou community. Some Ironlanders in Stonetower feel like I’m a spy or advanced scout for the Varou, but others feel that I must step up as an ambassador to stop the conflict with “my people”. There’s a lot of personal tension with the community around this.

However, the Oracle tells me that Stonetower, as a community is dead, civilized, and abandoned. There’s not much left here. The Ironlanders are the last dregs, trying to survive as a struggling outpost whilst still keeping up appearances, due to most of population leaving for elsewhere on account of the Varou danger.

I decide that I may explore having or developing a relationship with the Warden, or Freewarden, in this community, possibly seeking to become part of that group. But I’ll find out more about what Wardens look like during Worldbuilding later.

I next draft out cards from the Assets deck to see what randomly happens. Three Rituals: Keen, Leech, and Lightbearer. All three are ones that I was actually considering! Reflecting on these in relation to Mukoda as a character, I settle on the ritual Keen as one of my three starting Assets, especially since it relates to the Varou Keth blade from my heritage. I also realize that my stats probably aren’t ideal for Rituals, as perhaps I should have had more Wits, but I’m okay being sub-, or quasi-optimal. 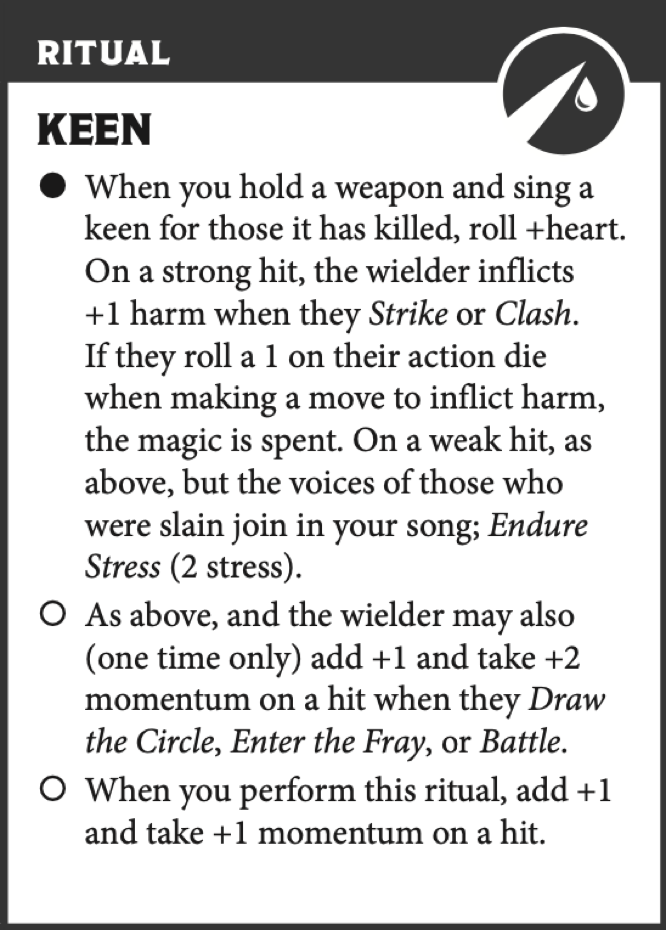 I consider Companions, but am not super excited about them now. Next I run through the plethora of Paths and Combat Talents, and think about them in combination with my particular character. I settle on adding the Combat Talent: Cutthroat and Path: Wildblood to finish rounding out my starting three Assets. 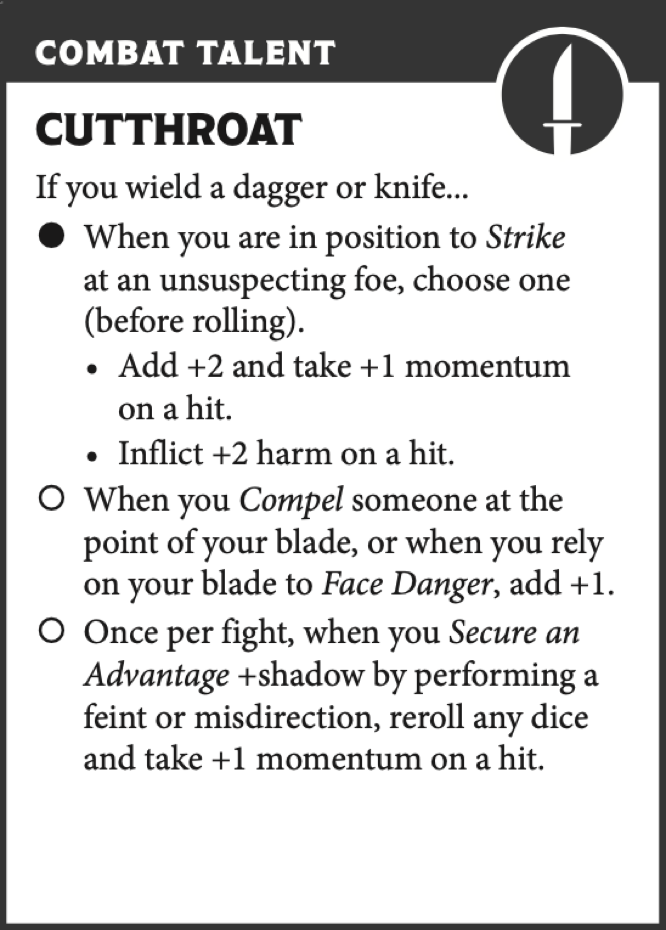 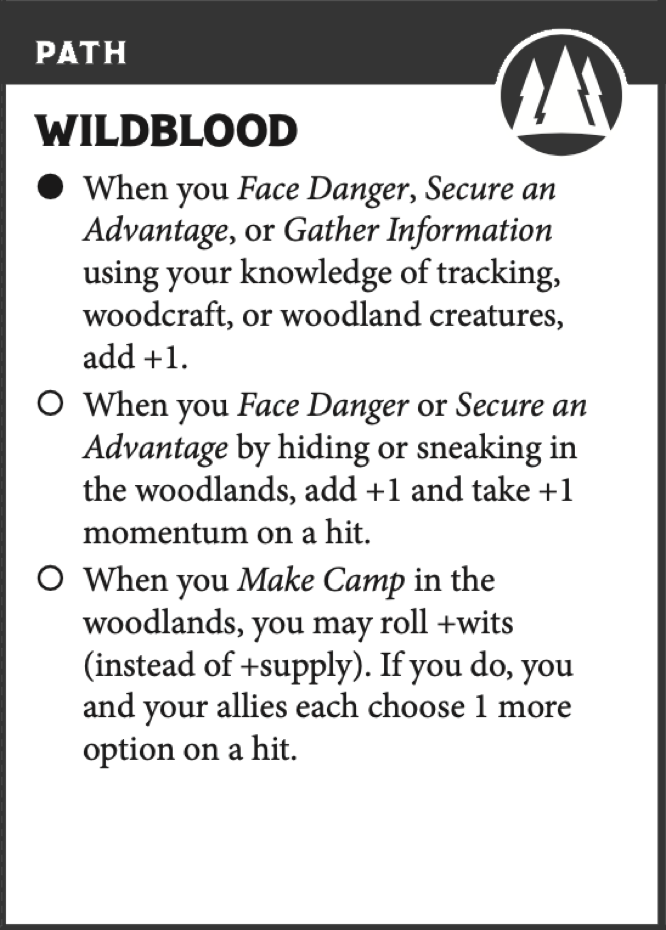 I think these fit very well with what I imagine to be Mukoda’s life up until now, on the hard scrabble and bloody dusty road as a Half-Varou.

Finally, I also decide to narratively provide myself with my keth, a curved Varou dagger, which I gained in my youth, as part of a rite of passage required before becoming an adult Varou. With that comes some narrative imperatives, such as that I had at least enough cultural contact with my Varou heritage to have undergone this ritual, in some fashion. I’ll find out more about that later, no doubt!

But, what is this world where I am?

Read the more at The Tales of Mukoda, Worldbuilding and Truths