Another month, and I still did some stuff. Not a lot, but some.

Big news, I suppose, to be fair, is that I might get to 666 followers on YouTube in September. Maybe. Probably? IDEK. I’ve given up trying to understand it. It’s a mystery of life. But, as it stands, as I write this, I’m at 662. 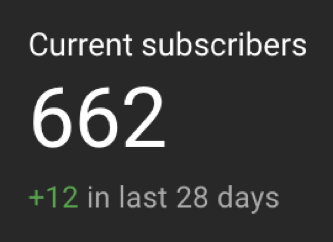 So, you know, unless something really strange happens (on the other hand, why wouldn’t it be strange?) … I’ll hit 666 next month. That means I’ll post something to the channel. I don’t entirely know what, but it will happen. Maybe. Probably? Yeah.

Looking over the last year, which is almost how long I’ve been on my current hiatus and not posting videos, my analytics are almost the same from day to day, week to week and month to month. But, it’s wild that I still gained a net +123 subscribers, albeit with some churn.

(Also, as an aside, I find it completely surreal that when I get a new subscriber and check them out, out of curiosity and to sanity check they aren’t awful enough to preemptively block, I find that just about everyone else they subscribe to has 10s or 100s of thousands of subscribers, or more. I’m, like, there, in the mix, with less than a thousand amongst all these others. It seems so friggin’ weird that there’s so much parallax and how out of place I seem. It’s all surreal, tbh.) 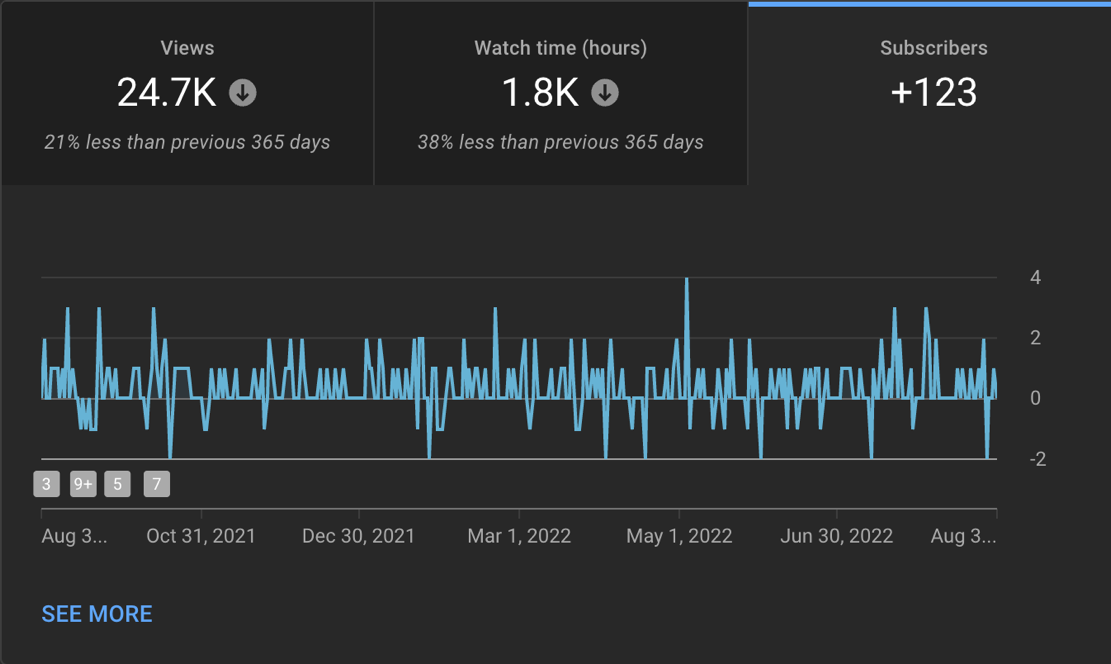 Also, I notice that over 90% of the people watching my videos don’t subscribe. 90% of my watch time comes from people that don’t subscribe. There’s however a slight increase in average view duration for subscribers over non subscribers, but that average is still very low; and that seems to end up true whether my video is long or short: people don’t watch for long either way.

However, compared to the previous year, there is a visible drop. Significant but not tragic. There’s a 20% drop in total views, almost 40% drop in total watch time. But, even with that, there’s still not that much difference in average watch time.

Yeah, but I don’t actually know what any of it means except that it really still feels like nothing I did whilst I was doing it made much difference from what happens if I just stop and do nothing. Right? I mean, maybe that’s just what it looks like and feels like at the middle of the long tail, but still (and let’s not talk about how according to Keymailer I was actually in the 90+ percentile across all their accounts?! That’s a whole lot of people doing worse analytically than me, innit?). It sucks for me to realize what seems to be just the inescapable futility of it all, in the grand scheme. Very few people watch what I post whether I’m posting stuff or not. If I’m not willing to change what I post, then I don’t see how that’s going to ever change; but if the way to change is to cater to the algorithm or be something I’m not and I’m not posting the things I want to post then I’m not going to do it.

Enough of that crap. Anyhow, that’s a glimpse at where my head is as I contemplate coming back for another video to mark 666 subscribers.

At the beginning of the month I posted a couple things to the blog. But, not much after that. I’ve also completely slowed down on my geeky social account. Not much done, not much to say, I guess.

That’s all there is for the last month.