N.B. I’m not actively seeking a group, but if I trip and fall into one … 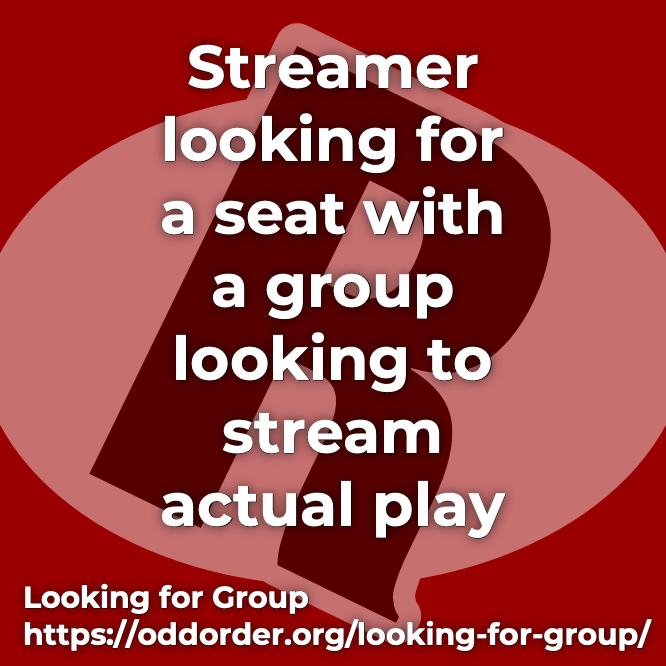 I’m an erstwhile small-time variety streamer, mostly of indie games and solo roleplaying. I’m looking for a seat with a group, moreover I’m also hoping for a group with which to stream actual play. By the by, I am also able to act as a stream manager for groups that want to do live or recorded actual play shows, and I’d consider being just a stream manager, even if I’m not playing, for the right group, if needed.

You can easily find me online, here or just google Rigaroga.

What I am looking for

I’ve not had the best of luck with groups overall, even if there’s been some outstanding moments and highlights; so, when I play I’ve been playing almost entirely solo for years. Honestly, I’m really feeling gun-shy about playing with others nowadays, but the dream is still there.

I’m an old-school player, since the age when all the AD&D 1e books were being released, that hadn’t played in decades but has been getting the itch again. In the past, I’ve tried playing with groups, but ended up going solo for a long time. I don’t currently have a group to play with, or friends to form a group from, and I’m hours from civilization, so I’ve mostly been playing my attempts at solo sessions which I’ve recorded and archived to my YouTube channel.

I’m system and genre agnostic but rather more interested in a good and fun game or group dynamic. I tend to be much more interested in narrative exploration than crunchy mechanics, wanting to see what storytelling is possible and emergent, but I can get very tactical when the situation calls for it.

I would like to join a group of active streaming remote actual players or recruit a roster of 6–9 people (nice) for a remote streaming gaming group. I’m planning on starting small but hoping, ultimately, to play in 2-3 games a week, with a variety of other players, systems and themes ongoing; either on my own channel or as a guest on someone else’s.

If you’ve got a group with an open seat at your table, let’s talk about whether we’ve got synergy and would have a good fit for gaming with each other!

If you’re interested in joining a gaming group, I’m also recruiting players to join the Quickstart Test Dummies, or whatever it ends up being called, which I imagine will start as a group that plays a wide variety of quickstarts, one/two/three-shots, and other limited episode campaigns in a wide variety of systems, perhaps with guest or hired GMs (and maybe not only RPGs, but also various tabletop things and even other stuff too, as the mood strikes us). And, if there ends up being a group, system, and GM we feel all works well together we can also talk about doing more. Or, who knows? I’m just throwing pasta at the wall to see what’s al dente. What ideas have you got cookin’?

Check out my archive for what I’ve played and how I play, but I’m open to any ideas. We should chat, and then do a warm up session or two to see if we get along. But, get in touch if you’d like to talk more about things in general or in specific.

But, let me say, although I can certainly murderhobo and munchkin, I find myself increasingly, especially in the times in which we live, interested far more in exploring the possibilities for collaborative non-combat storytelling.

(Also, as an aside, I’m open to asynchronous correspondence play.)

Logistically, I’m in the US/Central time zone and am most active in the morning and afternoons, my time. Realistically, I’m struggling with mostly outdated streaming gear, but I do what I can with what I’ve got. I’ve got the essentials anyway, and also a symmetrical 1 Gbps fiber connection.

Maybe I can get some people I’ve played with or who watch my stuff to say some nice things about me? Until then, check out my actual play archives for examples of me at the table.

Check out all my archived videos on my YouTube channel. Pretty much, literally, everything is there, that I’ve done since I started streaming things back in 2014. At some point maybe I should have a clip showcase or something. (Gah! I don’t even know where to start. If you notice something particularly good or goofy, let me know which video and the timestamp!)

Also I have a playlist of my guest appearances, where I am at someone else’s table, videos on other people’s channels, gathered together.

Everyone in a group I stream or record with must agree to be on stream, and I’d prefer to be able to include these in an archive, so there’s creative output to show, though not necessarily exclusively, in a saved playlist on my channel.

Everyone in groups I play with, whether public or not, must also abide by Wheaton’s Law and Twitch Community Guidelines at the table, and anywhere that I participate, whether on stream or not.

I also expect that every group in which I play to have some kind of agreements about at least basic safety tools for all modes of play and interaction.

I am not currently playing any games. ::sad trombone::