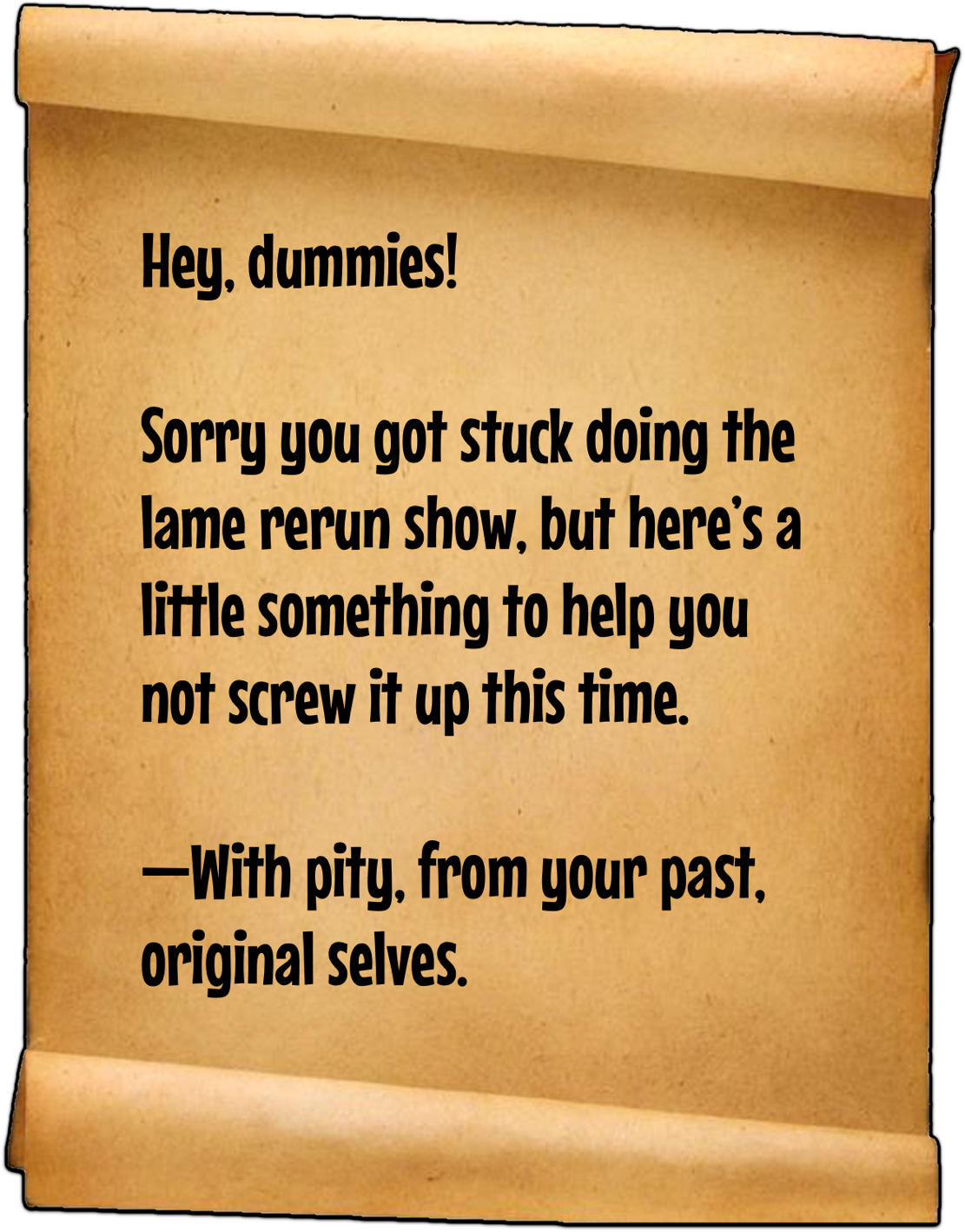 Read aloud in a Morty voiceover for the party to hear whilst they read the note:

“Hey, dummies! Sorry you got stuck doing the lame rerun show, but here’s a little something to help you not screw it up this time.—With pity, from your past, original selves.”

Along with this note is a Potion of Lesser Healing and a set of mint-condition Funko Pop! figures matching each character in the party.

(This is an in-game scroll left behind by the characters from my D&D 5e Solo with Rick and Morty actual play series, at my table, to two parties of characters playing the same characters in the same box set, but at different tables and different times,. This is asynchronous intertable / crosstable play, all using the Dungeons & Dragons vs Rick and Morty box set from Wizards of the Coast.)

Simón Mijares commented on my
D&D 5e Solo – Rick and Morty – The Lost Dungeon of Rickedness: Big Rick Energy – Episode 0 video, asking about the old links to my D&D Beyond character sheets for the box set, which had been disabled when I cancelled by subscription. I suggested we talk in email about it.

In email, we talked more about running the adventure and I realized that, since I wasn’t using any characters I could just activate the Rick & Morty sheets for the characters I had been playing in the actual play. (I had been working on comic-accurate versions of each character in the box set as well as sheets for the various version of Rick, like Gee-Willikers Petalbutt, Winterblade, Wizard Rick, Wizard-Fighter Rick, and so on. But, I never finished those, and don’t have enough free active slots to make them active anyway!) So, at least for now, the links in the video description work again, but I also sent an archive of exported PDF sheets for all my characters and the included free-to-copy pregens from the box. (There’s actually some differences, including a spelling error in a character’s name and an incorrect stat, and some other things I had to figure out, if I recall.)

Since Simón was going to be running The Lost Dungeon of Rickedness for a couple groups I also suggested including the letter above for those parties to find. (That’s it up there, that letter above. If you’re looking for it here, you missed it. This is text. That’s a graphic, with text. Go back up. I’d say you can’t miss it, but you already did. I’ll wait.) It’s just a little gift from me, across time and across tables, to Simón’s players, and to you and yours if you want it too!? Out of character you can let them know that it was me that sent it, if you want, even point them to this page after they’re done with the adventure, or just make it a weird timey-wimey mystery, as you like. If you also use this, be sure to let me know how it goes!

So, there’s the letter and a useful potion but also some useless Funko Pop! figures for the party to fight over and, I mean, if they actually figure out an awesome use for them (players always be playin’ after all), I’d love to hear it, but I added them really just for the potential chaos of having them as a red herring for the players to wonder about.

By the by, Simón let me know: “I ran the game twice this weekend an it was a blast! The first group reached around half the map. The second just reached the third room. I guess since the 2nd group was in person, there were more interruptions than the usual audio/game issues that happen in online sessions. I used the cufuc table in both cases, got to look for it on the first room! First time, Marty’s hair fell off. Second time, 12! All your organs are replaced with bees, instant death, no save! So Keth was replaced with Keeth. The potion was very well received, and they are trying to figure out what the Funkos are for. Next week we will try to finish the dungeon, so I guess they enjoy it enough. In the name of both groups, thanks for your help!”

I wanted to post about this for two reasons that I am wont to champion and think are important. The first is having creative output to show for one’s efforts. The second is that this is an example of asynchronous inter-table play, where people play with others across space and time between tables. I talk a lot about both of those all the time, so I’ll just mention them by reference here. 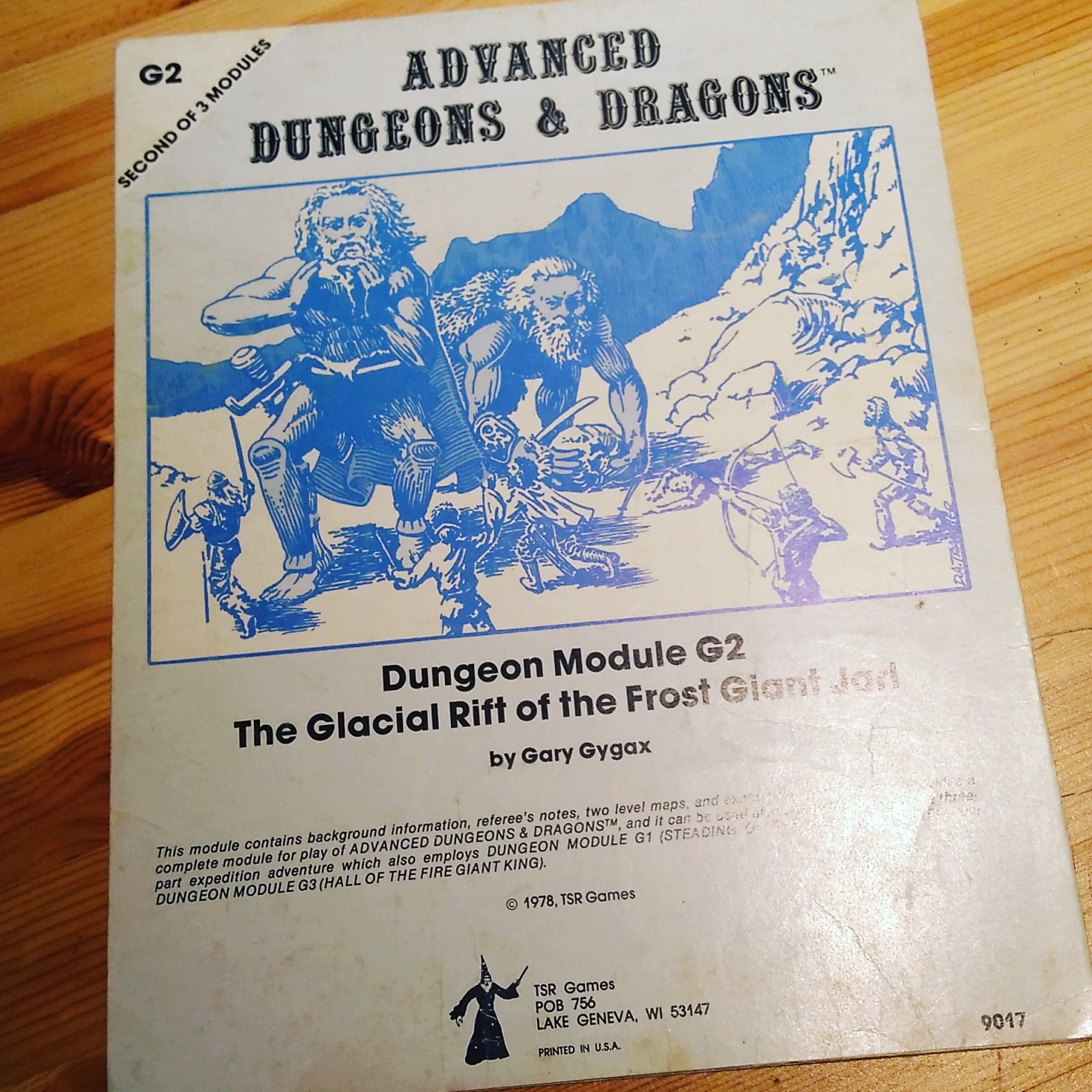 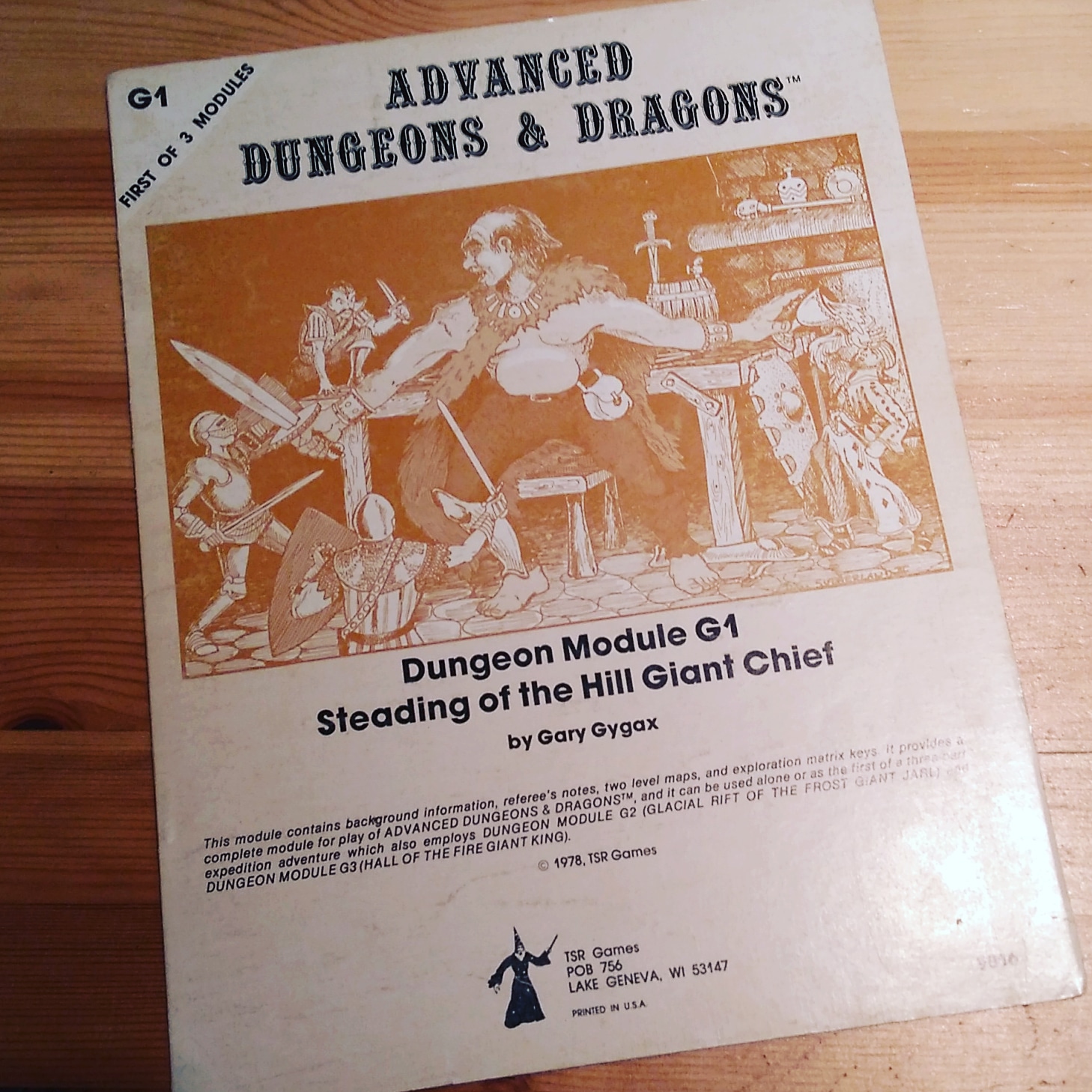 Idle Champions of the Forgotten Realms by Codename Entertainment 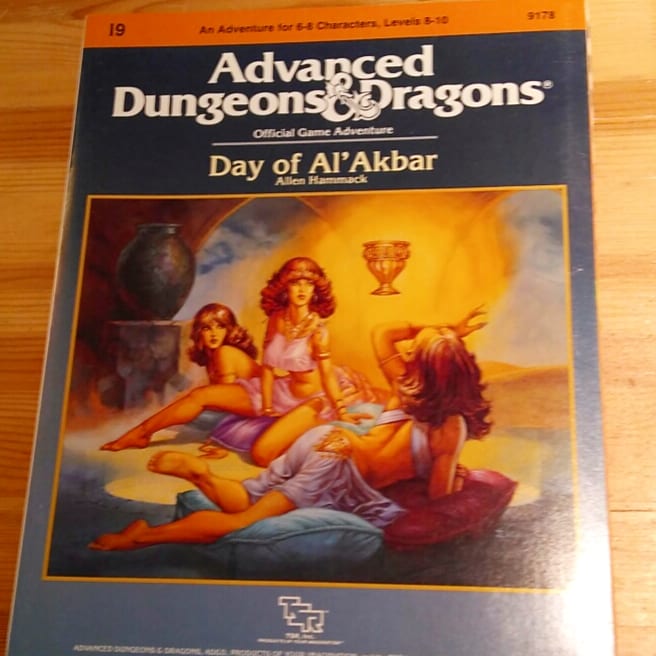 Advanced Dungeons & Dragons, Official Game Adventure, Day of Al’Akbar by Allen Hammack, module I9, An Adventure for 6-8 Characters, Levels 8-10, from TSR Inc, circa 1986 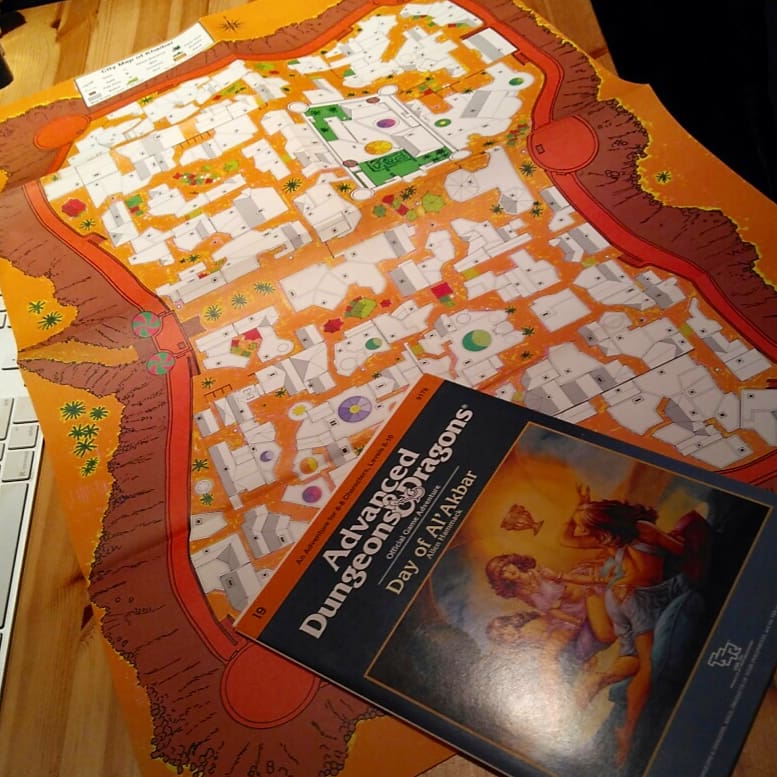 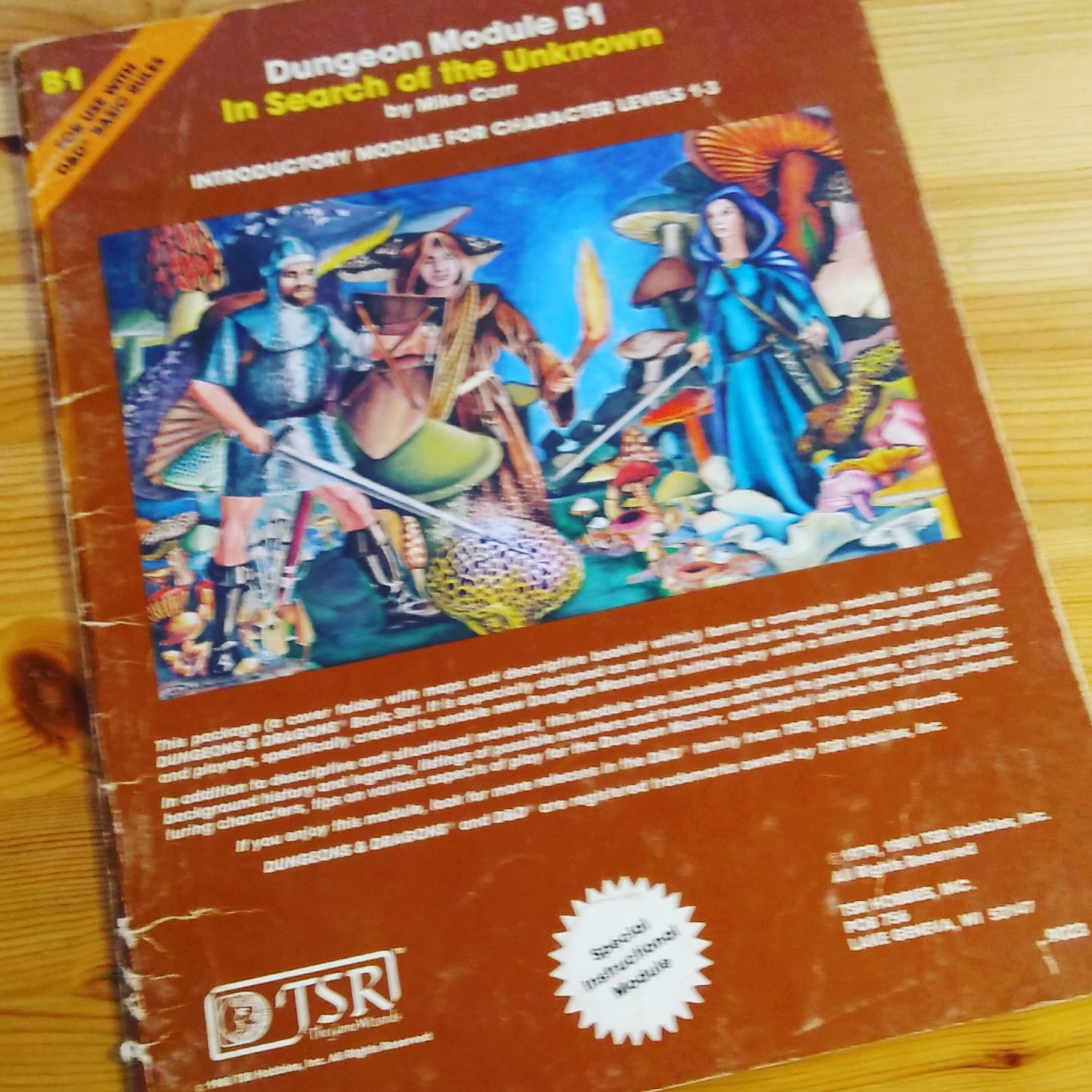 Dungeon Module B1, In Search of the Unknown by Mike Carr, introductory module for character levels 1-3, for use with D&D Basic rules, circa 1980 “Special Instructional Module”