In a recent stream, archived on my youtube channel, I tried to play the Solitaire Variant of Illimat [also], and hoped to actually follow the rules this time, as I had been unintentionally playing what I’ve called Easy Stockpiling. However, I ran into a bit of a pickle when I revealed The Butcher, a Luminary from The Crane Wife expansion.

The issue is that when The Butcher is revealed, the Luminary in the opposite field is discarded. However, according to the Solitaire Variant: “The goal of Illimat Solitaire is to reveal and collect all four of the Luminaries.” And if you’ve not already claimed the opposite Luminary, there are no longer four Luminaries to collect.

In the video, I muse over the question, for the result of my second game, whether revealing The Butcher ends the game with a loss, as it is no longer possible to claim four Luminaries, or could victory now still be had by claiming all possible remaining Luminaries (three, or four if The Newborn adds one more)? Or, perhaps victory is only possible if The Newborn adds back a new fourth Luminary?

Note that the Solitaire Variant also says, “If there are fewer than three cards remaining [in the draw deck] when a Luminary is revealed, the Luminary is discarded and a full victory is impossible.” This would suggest that the most proper reading of the variant is that if revealing The Butcher discards one of the four Luminaries, then full victory is now impossible.

At the table, I decided that I would try and see how it played out, but noted that I may have lost that game. I then continue to play and successfully claim the remaining three available Luminaries on the table.

After I was done streaming I asked Keith Baker, via Twitter, about this and he responded, “The Crane Wife Luminaries aren’t designed for Solitaire. The only one that seems like a good match for Solitaire is The Boat.”

Okay. Not with that attitude it isn’t. And, now, I’m going to go off on that.

First off that response didn’t actually answer my question, but rather shut it down. Way to put the kibosh on the enthusiasm of a player!

Point of order: Given that Solitaire is itself a variant, and changes the way Luminaries work, none of the Luminaries were designed for solitaire, per se.

Also, that’s weak sauce. If the response to trying to play the game with an expansion is that the expansion wasn’t designed for that, instead of trying to figure it out, then that is as much to say the expansion should be labelled as not valid for solitaire play, and I shouldn’t have bought it. Best request a refund. And, get off my lawn.

That seems also to be the opposite of what I think of as creativity and a game playing attitude.

Frankly, as a solitaire-only player, that makes me feel like I’m not welcome to play the game at all, and that the Solitaire Variant was a grudging afterthought. Perhaps it was only that. Perhaps I’m not. Perhaps solitaire players aren’t.

News from the game designer is, essentially, if you’re a solitaire player: Don’t buy The Crane Wife expansion. It’s not for you. If you want to play by the rules as designed, don’t.

Beyond that I’m probably now less interested in trying to make solitaire work for any other Keith Baker games, and I had actually been considering another. But, even leaving other now unlikely game purchases out, I’ll have a bad taste in my mouth for any future Illimat expansions, and am far less enthusiastic about trying to participate in Society of Luminaries meta-game stuff or likely to follow through with buying several available, completely optional, Illimat tchotchkes I’d been seriously thinking about spending real money on as a would-be solitaire once-and-no-longer-future enthusiast of this game in particular.

With all due respect to Keith Baker, screw that wet blanket noise. I bought your damned game and the twice damned expansion with my damned limited and precious gold, and, by the eternally damned gods, I’m going to damned well play the freakin’ hell out of it. Moreover, I’ll be damned if I’m not going to do it now just to spite you. I mean, damn, man!

For the game and expansion I’ve got and paid for already, of course it is possible to play the game with the expansion as a solitaire player. It’s just a matter of figuring it out. It’s just a darned disappointment and dang discouraging to have the game designer say it isn’t.

Now I’m done ranting. Except in my head. I’m still mad and ranting about this in my head. Damn. Maybe I will put the game on a shelf not to be played again after all. I don’t know yet. We’ll see how I feel about it later.

On the other hand, to be fair, I think you can see why I’m single, live alone, have no friends, and only play games solitaire.

If you’re still here, here’s how I suggest you can play with The Butcher in Solitaire, served three ways. The first way is the closest reading to the canonical Solitaire Variant. The second is slightly more divergent. The third is my personal favourite of the three, and ultimately is my suggestion. For the third, I preface that with a suggestion about a change to the Solitaire Variant that I think improves it, makes it more fun and friendly.

The Butcher in Solitaire #2 — When The Butcher is revealed, the opposite Luminary is discarded. If not already claimed, the opposite Luminary is discarded and a full victory is impossible unless The Newborn is later revealed in play and causes a new fourth Luminary to be made available, and all of the new four available are claimed before the draw pile runs out.

Solitaire Variant Improved — Where the Solitaire Variant says or implies the goal is to “collect all four of the Luminaries”, read “collect as many Luminaries as possible.” That means that you want to claim all the Luminaries available on the table, though that number might increase or decrease based on the Luminaries revealed. Then, you can always note how many Luminaries you claimed and if you got all Luminaries on the table before running out of cards in the draw pile, thus “2 Luminaries, Loss” or “4 Luminaries, Win”. Hey, and since we’re here, let’s also change the preamble to be less disparaging and dismissive of those playing solitaire, where it claims to exist to “provide solace” for those with “no companions” or only for “sharpen[ing] your skills when plotting revenge on a future opponent”. How about simply saying that this variant is for those who chose to have fun playing solitaire?

The Butcher in Solitaire #3 — Using Solitaire Variant Improved, when The Butcher is revealed, the opposite Luminary is discarded. This reduces the number of available Luminaries that can be claimed to three, unless The Newborn is revealed and causes a new fourth Luminary to be made available. (If The Butcher is not revealed, but The Newborn is, and causes a new fifth Luminary to be made available, that increases the available Luminaries to five.) Continue to play and claim as many Luminaries as possible before the draw pile is exhausted. If there are still Luminaries to claim when the draw pile is exhausted, you may wish to consider Solitaire Rounds to continue playing. 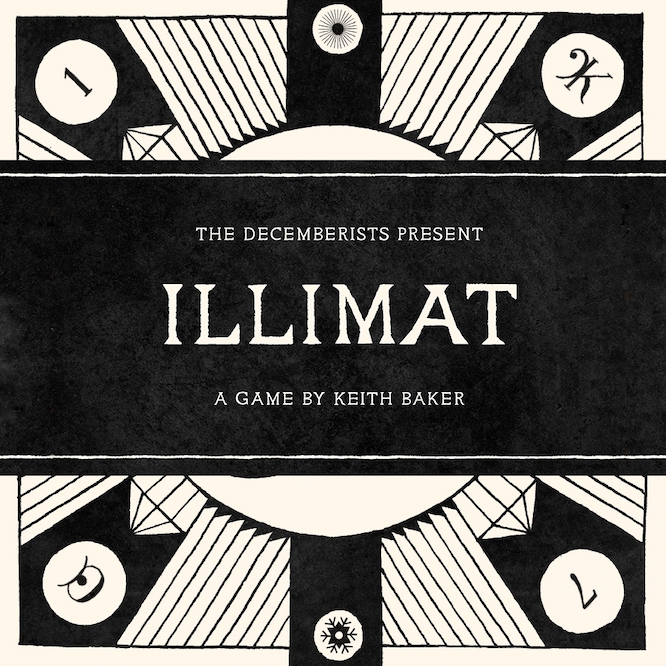 In a recent stream, archived on my youtube channel, I describe a few possible new variants for Illimat [also]. One of those is Easy Stockpiling, because I seem to have forgotten about the rule that I can stockpile only if there’s a way to claim the pile in my hand at the time, so …

Easy Stockpiling — One can decide to allow allow looser, easier stockpiling. In this variant, one can stockpile even when there’s no way to claim the pile in one’s current hand.

In a recent stream, archived on my youtube channel, I describe a few possible new variants for Illimat [also]. One of those is Market, and here’s my current idea on what that could be.

Market Variant — In multiplayer games, the card that could have been dealt to the player after the dealer as their 4th card, which they are not given in regular play, is placed into the “market”, a separate single card deck on the table, face down.

A player may, on their turn, play a card from their hand, face down into the market, to claim the current market card. This is taking their cards to “market”, following the farming metaphor of sow, harvest, and stockpile.

Necronomicards is “a competitive card game of horror, strategy, & luck” by Adam Hunt. Whilst waiting for Vol 2 to arrive in the mail yesterday, but it got delayed until this weekend, I created a quick rules variant to allow for solo play.

Watch live at Rigaroga on Twitch